The Savannah, Ga. poet Conrad Aiken and his wife saw a freighter in the harbor on their morning walk. The name of the ship was “Cosmos Mariner.” Looking it up in the day’s Shipping News, they learned it was bound for “Destination Unknown.”

COSMOS MARINER—DESTINATION UNKNOWN became one of the epitaphs engraved on the famous Conrad Aiken Bench in Bonaventure Cemetery. The riddle is discussed near the beginning of “Midnight in the Garden of Good and Evil” when author John Berendt goes to sit on the bench to have martinis with one of Savannah’s charming society ladies. It may as well be the story of my life and my own mixed ancestry, mostly Scottish, English, Irish and Cherokee.

This “Learning Curve” module will go over parts of the various DNA Fingerprint Reports I have taken over the years. It will walk you through the world matches (where some of the 65 American Indian populations we have in our database appear), megapopulations, metapopulations and European countries of origin. You can click on any hyperlinked text for more explanations.

World Forensic Matches according to atDNA Database 10.3 Dated May 13, 2020

The first pages in a full report present the top fifty populations where your unique personal DNA profile is of common occurrence statistically, and where it can be inferred you are most likely to have some ancestry. Though we cannot say how much or what percentage of any ancestry, if a population appears in your top fifty it is highly significant. There are over five hundred available populations—virtually every ethnic group in the world—so that’s the top ten percentile. If an ancestry does not appear in the top tranche it may be because we do not have data for that ancestral type or the data is resident in another part of the database (see European below).

INTERPRETATION. RMP stands for random match probability–percentage of each population group matching Donald Yates’ 9-loci STR profile, for instance percentage 0.000000001394. 1/RMP is the inverse of this statistic, for instance, 1 in 71,758,000,000. One way of stating these results is to say that if there are 8 billion people alive today, 11 or more individuals walking around on the planet could be predicted to have profiles that match Donald Yates and hence have similar ancestry. They are most likely to be Mongols, Siberians, Turkic people or American Indians. In Europe, they are likely to live in Norway and Sweden. In terms of orders of magnitude, Donald Yates’ match with enrolled Cherokees from North Carolina (no. 3) is 10 times stronger than his match with Hispanics (no. 20) or Whites (no. 26).

In terms of metapopulations, Native American appears as no. 5: 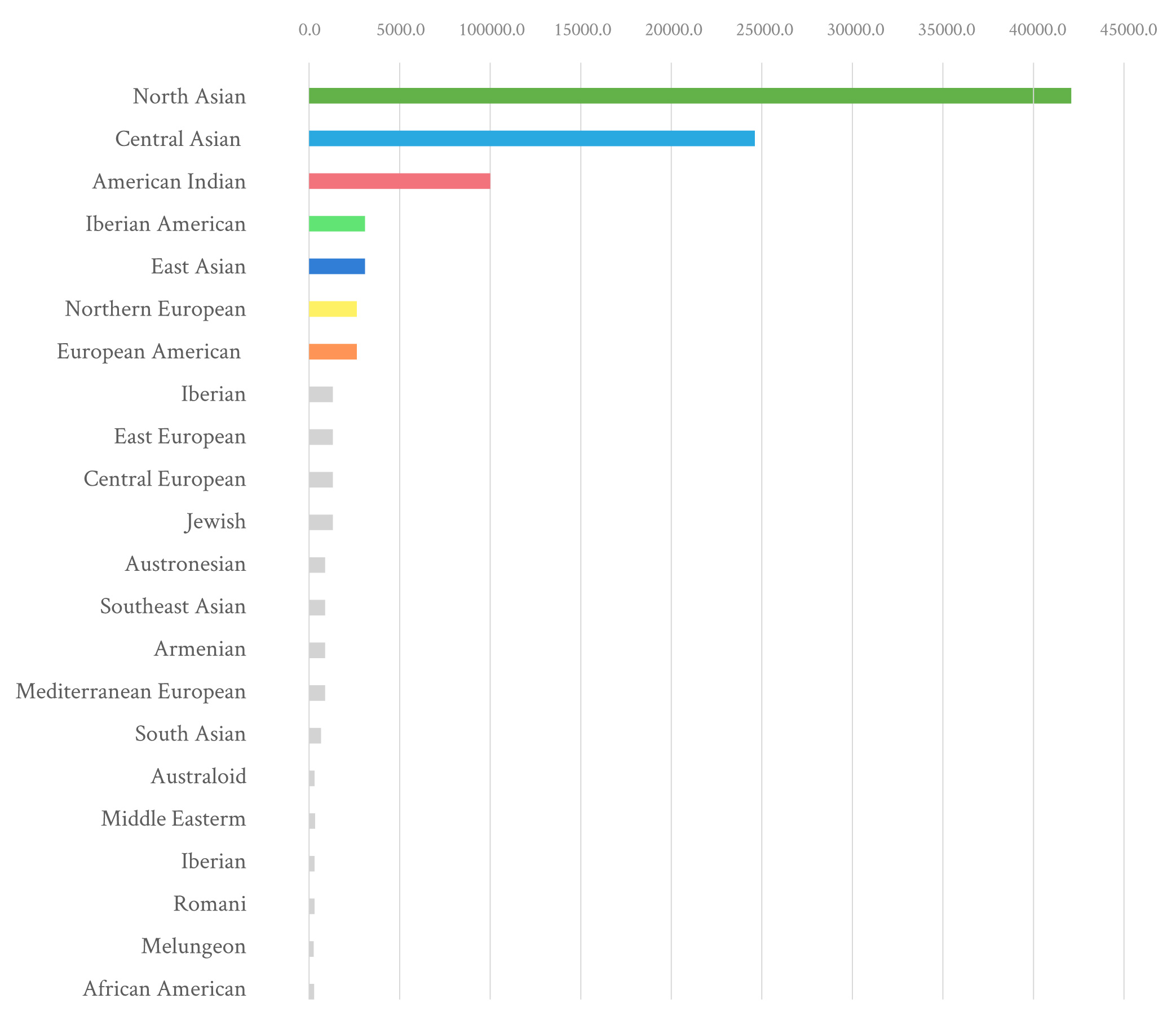 Finally, if we look at European matches, here is the picture:

Except for the important matches of Finland, Estonia, Sweden and Norway (which have no associated surnames because they are deep history, e.g., Euchee and other Eastern North American Indian), the national elements correspond very well with the genetic components. In the same way, the genetic landscape of Europe has been demonstrated to correspond with national and linguistic borders. The reasons for such an alignment are simple. People meet and marry people who speak their language and live nearby them.

Does this mean I am American Indian or have mostly American Indian ancestry? Not really. We cannot equate any of this with percentages. No population is pure, no person is unmixed. I am like all other cosmic travelers.

The beauty of our method, however, is that it gives me forensic matches to living populations, not theoretical gene pools of the past. If I match the population sample named U.S. Cherokee Enrolled (n=33)—which I do in a salient position, no. 3—it is because my numbers look very similar to those of the reference population, thirty-three card-carrying members of the Eastern Band of Cherokee Indians.

I am not a card-carrying Indian (except as a member of the state group Echota Cherokee), and one of my known ancestors, Chief Black Fox (died 1811), lived before Indian rolls were introduced and may have been Choctaw or Chickasaw. He was likely an adopted Cherokee, part white anyway, but that doesn’t matter. The reference sample participants could have been very admixed as well and have only a small degree of what others define as American Indian. I matched them, there was no mismatch, no mistake. We have highly similar ancestry whatever it is.

Would you rather be descended from an algorithm or an ancestor?

More Tips and Resources for Understanding Your Results

Learn about DNA (learning module on our website, with glossaries, links and references)