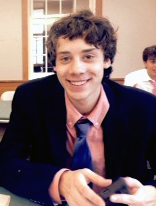 The Cherokee are the largest and best-known American Indian group in the United States.

There are three federally recognized tribes, Eastern Band of Cherokee Indians, Cherokee Nation of Oklahoma and the United Keetoowah Band of Cherokee Indians (UKB), in addition to numerous state tribes and local communities. Organized Cherokee tribes exist today even in Canada, Puerto Rico and Mexico. Millions of Americans have some degree of Cherokee admixture, even if they do not know its precise sources in their genealogies. Officially enrolled Cherokee may have a small “blood quantum,” not speak the Cherokee language, not live in a Cherokee district and not know much about Cherokee culture or history. The current chief of the Cherokee Nation of Oklahoma (2018) is only 1/32 Cherokee by blood.

Photo: Zachary R. LaRocca-Stravalle has Cherokee blood on both his mother’s and father’s side. He lives in New Mexico.

If You Have a Match You Probably Also Have:

The admixed Cherokee population data represent DNA samples from 154 randomly chosen individuals across the country, most with reported roots in Tennessee, North Carolina, Georgia, Alabama, Arkansas and Oklahoma. Samples were provided by participants in DNA Consultants’ Cherokee DNA Project from 2008 to 2017. Usually the participant has proved their Cherokee descent with mitochondrial DNA through the mother and other DNA tests as well as genealogical documents.

Religion
Various Protestant denominations, especially Baptist, Methodist and Pentecostal, also Mormon, Catholic and Jewish, often offbeat sects like faith healers, but believed to have once included secret Jews and Muslims, Moors, Armenians and Turks. The ancient Cherokee religion experienced a revival in the Ghost Dance Movement of the early nineteenth-century and Nighthawk Society of the late nineteenth and early twentieth.