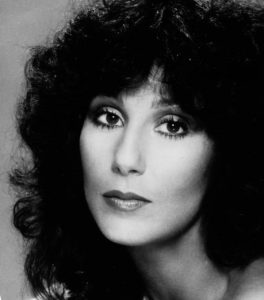 When Cher recorded the hit “Half Breed” and it began climbing the charts in 1973, she jumped on the Native American ancestry bandwagon. The superstar claimed she was one-sixteenth Cherokee on her mother’s side.

Does Cher have any Cherokee ancestry? This is a question that ought to be easy to answer. The Goddess of Pop was born Cherilyn Sarkisian, May 20, 1946, in El Centro, a southern California town near the Mexican border that has the distinction of being the largest American municipality to lie entirely below sea level. Her mother, Georgia Holt, was an occasional model and bit-part actress who claimed Irish, English, German and Cherokee ancestry. Her father, John Sarkisian, was an Armenian American truck driver with drug and gambling problems.

Despite extensive research no record of the marriage “about 1945” of Holt (then supposedly going by the last name of Crouch) and Sarkisian can be found. They would both have been about 18 years old.

Family records give Jackie Jean’s mother’s name as Lynda Inez Gully, but genealogy research cannot confirm this. Her father was Roy Malloy Crouch, born in Arkansas in 1905. Crouch died in Oklahoma City in 1969. He was 17 when Jackie Jean was born. The mother was 13. Crouch’s occupation given on census records was pastry baker. According to publicity information in later years, Dad moved from town to town looking for work, and he taught his daughter how to sing and play guitar. At 6 she was performing on an Oklahoma City radio station, and by 10 she had sung with bandleader Bob Wills and his Texas Playboys. Holt said in later years that she attended 17 junior high schools.

Holt and her father settled in a rundown one-room dwelling in Los Angeles. The teenaged Crouch worked in a donut shop. She married John Sarkisian in 1946, according to family traditions; they divorced a year later, remarried in 1965, and divorced again in 1966. Sarkisian, as previously stated, was the father of her daughter Cherilyn, born on May 20, 1946. Around this time, she changed her name to Georgia Pelham. After divorcing Sarkisian, she had several subsequent husbands: Chris Alcaide, John Southall (with whom she had daughter Georganne in 1951), Joseph Harper Collins, Gilbert LaPiere, and Hamilton Holt. Gilbert LaPiere legally adopted Cherilyn and Georganne, changing their last names to LaPiere.

Cher’s mother changed both her first and last name and took various married names over the years. The diva’s mother was still alive in 2019, aged 92.
Jackie Jean Holt’s ancestry has been assembled by William Addams Reitwiesner in a web page, “Ancestry of Cher.” As compiled, it goes back ten generations in America and could possibly support a small amount of Cherokee.

Some of the families involved were pioneers in Arkansas that moved there from Cherokee lands in Tennessee about the time of Indian Removal. Names in Cher’s family tree also appearing on Cherokee rolls include Bookout, Carter, Waldron (Waldon), Webber, Robinson, Moon, Clark, Pearce, Green, Moore, Barnes and Brown. Few of these names occur in a timeframe close to Cher’s mother’s birth, however, and while there are many Crouches on the rolls, there is not a single Couch. One searches in vain for revealing marriage patterns or repeated alliances between part-Cherokees in the same places. Cher’s maternal ancestors did not let the grass grow under their feet.

If Cher was one-sixteenth Cherokee, by the law of numbers one of her mother’s great-grandparents was Cherokee. Their names were William Howard Crouch, Mary Ann Bookout, William Martin Green, Julia Ann Bryant, Thomas Gulley (b. 1836), Delilah Donaho (b. Georgia, ancestors Irish), Frederick Fritsch (b. in Germany) and Margaret Ann Stewart (b. 1835 in Tenn. of Scots-Irish parents). None of these could have been even half or quarter-Cherokee.

In the generations prior to the 1830s the ancestry of all Cher’s forebears on her mother’s side was clearly Scots-Irish, Scottish, Irish, English, German or Dutch. If one of these married a Cherokee woman (for instance, an otherwise unidentified Jane), Cher could have been one-sixty-fourth Cherokee. But even this is unlikely.

In later years, Cher disavowed her claim of Cherokee heritage and said it was “false.”

Cher’s Armenian ancestry on her father’s side is unassailable. John Paul Sarkisian was born March 23, 1926, in Oakland, California. He died January 28, 1985, in Fresno, California. He was all Armenian. Both his parents George and Blanche (originally named Siranous) emigrated from Turkey, where they were registered as Armenian. His grandparents and great-grandparents were Armenians.

Both sets of Cher’s Armenian grandparents had strong ties with Fresno, California. Her Dilkian great-grandparents, Hagop and Noussaper, a weaver and seamstress by trade, gravitated to Fresno after fleeing Turkey via Patras, Greece, and arriving in New York on the S.S. Alice in 1912. Noussaper, adopting the name Lucy in California, died in Fresno in September 1972 at the age of 94 and was buried at Ararat Armenian Cemetery. John Sarkisian went to technical school in Fresno and was drafted there in World War II. He would be buried there, too. Cher’s Aunt Louise, who died on March 26, 2008, at the age of 93, was also buried in Fresno, in a coveted plot in the Ararat Cemetery.

The Little Armenia section of Fresno in the south of California’s Central Valley was like a New Jerusalem for Armenians. It was the immigrant world portrayed in many of William Saroyan’s prize-winning writings. Saroyan, who was born in 1908, had half his ashes buried at Ararat Cemetery in 1981, less than a mile from the house in which he was born. The other half of his ashes were placed in Armenia at the Komitas Pantheon near fellow artists such as composer Aram Khachaturian, painter Martiros Saryan and film director Sergei Parajanov. Such a gesture well captured the divided identity experienced by Armenians in America in the twentieth century.

Armenians who escaped the Massacre of 1915 joined relatives in communities like Fresno and Los Angeles and typically took low-paying jobs picking fruit or working at canneries. Many never took the trouble to learn English. John’s mother and father bought a home valued at $4500 in Modesto, California and began the process of naturalization in 1930. George Sarkisian, Cher’s paternal grandfather, was manager of a service station.

John’s maternal grandparents, Hagop and Nousapper (Lucy) Dilkian, also eventually managed to purchase a home in Modesto, though they remained aliens speaking mostly Armenian. One census taker who found Hagop living with his son in a shanty worth $20 and working odd jobs in 1930 thought the family spoke Arabic. Next door were Japanese and Mexicans.

All told, Cher’s ancestry is half Armenian and half Scottish, Irish, English, German and Dutch. Even if her family includes Gypsies, tramps and thieves, there was, verifiably, not a single Native American line anywhere. The only Cherokee princess in her background came from the publicity department.