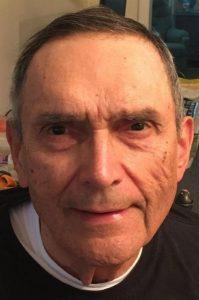 Gaylord Carlyle Hinshaw, a descendant of the last principal war chief of the Shawnee Tribe of Indians, has devoted his adult life to uncovering the past—the earth’s history and his own Native heritage.

Educated as a geologist, he applied his expertise of 55 years studying the earth’s layers yielding oil and natural gas to the contemporary fuel industry.  He earned a master’s degree in geology from Kansas State University in 1960 and went to work as a petroleum exploration geologist for Texaco in June of that year in Columbus, Ohio.

The following year, he opened a one-man exploration office for the firm in Lexington, Ky., where he prospected areas from southern Illinois to the Appalachians. He was moved to the Ardmore, Oklahoma office, and then in November 1965 to the Tulsa office as division staff geologist, handling exploration and budget work for Texaco’s Mid-Continent, Central Interior, Appalachian, and Atlantic Offshore areas.  He was named assistant district geologist two years later in Oklahoma City and quickly rose to district geologist.

He remained in management roles with Texaco until he joined Mitchell Energy in Houston, ten years later, and soon after that, Statex Petroleum. His knowledge and skills served Magic Circle Energy Corp., Congress Consolidated Gold Mine Corp. Ltd., and Kerr-McGee Corp. before he opened his own company, Bluejacket Exploration, in February of 1989, named for a Shawnee ancestor.  He’s consulted for various companies, government agencies and Indian tribes.

Besides his domestic work, he served as a member of an extensive scientific exchange for the petroleum industry to the People’s Republic of China and helped host a return visit by Chinese geologists in 1988. One client he added in 2005 included international projects in the Black Sea and Bulgaria.

As a semiretired consultant, in 2013-14, he taught a 5-hour credit course at Labette Community College in his hometown of Parsons, Kan.

Now fully retired, the 87-year-old Carlyle, who lives in Maytown, Pa., with his second wife, Jean, serves only occasionally as a consultant: “I don’t seek out projects.”

Born in California in 1933, Carlyle moved at 9 months old to Vinita, Okla., when his parents divorced. His mother, Laura Evelyn Lewter Hinshaw, allowed her adopted, retired father of Parsons, Kan., to serve as guardian for 1-year-old Carlyle as she traveled for employment in the hospitality industry. While he grew up in Parsons with William Lewis Dukes and his wife, Eva Warrenfelt, the youngster also often visited father Felix Carlyle Hinshaw’s parents in Vinita, 60 miles away by railway.

Shawnee displaced by the U.S. government’s push for white settlement in what is now Ohio were moved to Indian Territory across the Mississippi River during the 1800s. The government joined them together with the Cherokee in Indian Territory as Adopted Shawnee, Carlyle says. Throughout his childhood, his grandmother told him they were Cherokee.

Carlyle grew up working after school, playing several sports and reading. He earned an associate’s degree from Parsons Junior College before serving in the military. After discharge, he earned his bachelor’s degree in geology in 1959 and his master’s degree the following year from Kansas State University. He joined Texaco and began work as an exploration geologist.

But in the early 1990s, Carlyle expanded his interests to tracing his Native American heritage after discovering his ancestors were Shawnee. He’d already known of the family line back to Blue Jacket, born about 1735, from his Grandmother Hinshaw. Blue Jacket had risen to lead an alliance of Indian tribes against the American colonists setting their aim on lands in territory now known as Ohio. His pupil Tecumseh continued the fight until he died in the War of 1812.

Carlyle assembled a genealogy of Blue Jacket’s family from sources he found. His ancestor bore the name Se-pet-te-ke-na-the (Big Rabbit) as a child. After the murder of Shawnee Chief Cornstalk at Fort Randolph in 1777, the younger Shawnee war chief chose the name Wawayapieerswaw (The Whirlpool). White traders and fighters tagged him “Blue Jacket” because of clothes he was seen wearing. Born on the north branch of the Susquehanna River in Pennsylvania, he died in 1810 in Wyandotte, Mich.

Through documentation, Carlyle was able to join the Cherokee in 2000 because his ancestors had been Shawnee adopted by the Cherokee; however the next year after the U.S. government recognized the Shawnee as their own tribe, he relinquished his Cherokee membership to join the Shawnee Tribe.

As Carlyle researched his family, he met an ever-widening circle of other Shawnee researchers, attended gatherings, and partnered with Winston Charles (Chuck) Bingham in 2001 to develop a website for the Shawnee Tribe. Carlyle says Chuck developed the technology and he worked on the content.

The Shawnee Tribe announced it wanted to develop its own website in 2005. Carlyle and Chuck, both descendants of Blue Jacket, shut down theirs, transitioning it to shawnee-bluejacket.com with its focus on Bluejacket branches. However, Carlyle says he continued serving on the tribal election committee for 15 years.

Among the researchers Carlyle connected with is distant cousin Dorene Soiret, a descendant of the Shawnee Chief Cornstalk with whom Blue Jacket fought the white settlers.

Dorene, who has her own blog, thecaseforblueskyandparkeradkins.com, recalls it was her cousin John Blake, an avid family researcher, who provided her Carlyle’s telephone contact information.  Carlyle and Dorene enjoy speaking on the phone several hours each week exchanging research and information and discussing family DNA.

The Shawnee Tribe voted in 2019 to allow dual membership for the Shawnee and the Cherokee.

“So, I reinstituted my Cherokee Nation membership,” Carlyle says. “That makes me a two-card carrying reinstituter.”

Having grown up in Parsons with deep roots in Vinita, Carlyle married Patricia Lou “Patty” Stephens of Erie, Kan., in 1955 and raised two sons and a daughter: Gaylord Carlyle Hinshaw II, Grady Lewis Hinshaw, and Deborah Ann Hinshaw. He and Patty were married 53 years until her death in 2008.

Carlyle has taken a Native American Fingerprint Plus and Premium Female test with DNA Consultants.  He says, although his children had their DNA tested through another company, they have a low level of interest in their heritages for now.

Carlyle retired in 2009 and moved to Windber, Pa., to be with his second son. Two years later, he met Jean. They married in 2012 and decided to move to Parsons where he taught geology at Labette Community College, formerly known as Parsons Junior College. Although he and Jean moved back to Pennsylvania in 2014, Carlyle’s ties to his childhood friends and the community remain strong.

“Today, even though I live in Pennsylvania, I am still a member of the First Presbyterian Church in Parsons, which I still support,” he explains. “I still communicate with Parsons friends that I went to school with there.”

And why not? He’s got fun memories and entertaining tales of their escapades.

An early story that his mother recounted to him involves family friend Will Rogers, who was Cherokee.

In late August of 1934, Vinita held a rodeo and the famous rope-twirling humorist was in town for a school reunion and an Old Timers Parade. He was visiting the Hinshaws and others when he asked Carlyle’s mother, “Mrs. Hinshaw, would you let me take your little Carlyle with me in the parade?”

With visions of toddler Carlyle tumbling from Will’s horse and landing on his head, she declined. The next August, Rogers and Wiley Post, the first man to fly around the world, died in an air crash in Alaska, at the height of their popularity.  Both were of Cherokee ancestry.

As a college student, Carlyle had Wallace A. Swanson as his geology teacher and football coach. Wallace also recruited Carlyle to play basketball for his military police reserves unit in Parsons.

In 1953, Mickey Mantle and some high school buddies from Commerce, Okla., came to town to play a charity basketball double-header. The Parsons YMCA Industrial League’s best team faced Mickey’s boys. Carlyle’s MP team and another YMCA team played the first game. Dean Smith, fresh out of the University of Kansas and not yet the legend he later became, asked Carlyle to play for his  team against the Commerce team. Carlyle asked him why, and Dean replied, “Carlyle, these guys are big, and I need some meat on the floor.” At the time, Carlyle recalls, his playing weight was 215 pounds.

“The only thing I remember about the game was that Mickey stole the ball under our basket and headed down the floor,” he says. “I beat him down the floor and squared up. Then, Mickey ran smack dab into me. I was flipped head over heels to the floor.”

He received a free shot, but doesn’t remember who won the game.

Even in full retirement, Carlyle’s interests in geology and his heritage do not wane. Research on the Bluejacket lines and the Shawnee continues. He keeps active with daily walks, and he and Jean attend church. And he’s worked on several geology lessons for 9-year-old Grace, whose mother homeschools her, in his “spare” time.

Jakay Jarvis is an investigator and research associate at DNA Consultants. She lives in Florida but her family is from Kentucky. She is a graduate of Stetson University, DeLand, Fla. and previously pursued a career in journalism. Contact her at jakay@dnaconsultants.com.