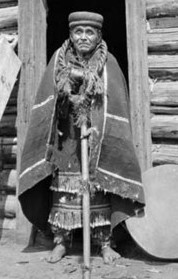 The indigenous people of Yukon are part of the Aboriginal people of Canada. Traditionally, the Yukon indigenous peoples are hunters and gatherers with close connections to the land, the rivers and the seasons. The Yukon was inhabited by six principle indigenous tribes: Kutchin, Hän, Kaska, Tagish, Tutchone and Teslin.

People arrived in the Yukon around 11000 BCE presumably via the land bridge of the Bering Strait. The Mount Saint Elias region, in the far southwest of the Yukon Territory was unsettled. The Inuit (Eskimo) people occupied the Arctic coast of modern Yukon, including Herschel Island. The population of indigenous people of the Yukon prior to arrival of Europeans in the 1840s is uncertain. The number at the beginning of the nineteenth century most likely lies between 7000 and 9000 or more. By 1830, there were approximately 4700 indigenous people living in the Yukon. In 2006, approximately twenty-five percent of the population of the Yukon Territory were indigenous people. Only twelve percent were fluent in the language of their nation. Fourteen First Nations represented eight language groups. In 1991, an ongoing program for preservation of these languages was begun in Voices of the Talking Circle, the proceedings of the Yukon Aboriginal Language Services which emphasized that the people are the proper stewards of their languages and maintaining a critical mass of fluent speakers is essential.

Canada – Yukon Territory – Eskimo population data are based on blood samples obtained from 11 unrelated individuals living in the Southwestern United States in 2016.