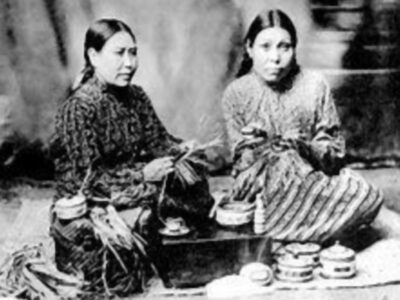 The Nootka (alternatively called Nutka, Aht, Nuuchahnulth or Tahkaht) are an American Indian group located mainly on Vancouver Island. The term nootka is not a native one but seems to refer to Captain Cook’s rendering of what he thought the native people were calling themselves or their territory when he arrived in March 1778. Nootka people are customarily divided into three groups known as the Northern, Central, and Southern Nootkan tribes. Today, the Nootka people as a group prefer to call themselves Westcoast People and number between 4,000 and 6,000. They once were estimated to number more than double that total but experienced as much as a 90% death rate once exposed to disease (particularly malaria and smallpox) brought by European and American explorers.

In 1979, the tribes of western Vancouver Island chose the term Nuu-chah-nulth (nuučaan̓uł, meaning “all along the mountains and sea”), as a collective term of identification. This was the culmination of the 1958 alliance forged among these tribes in order to present a unified political voice to the levels of government and European-Canadian society.

Canada – British  Columbia – Nootka Indians population data are based on blood samples obtained from 9 unrelated individuals living in the Southwestern United States in 2016.