Anyone undertaking to set himself up as judge in the field of truth and knowledge is sure to be shipwrecked by the laughter of the gods.
—Albert Einstein

In my research, I am usually more tempted to claim “We wuz right,” but it is only proper that I should recant on the current occasion. Twenty years ago, I wrote an article in the Journal of Cherokee Studies suggesting a group of representative Creek Indians painted in England in 1734 were more likely Cherokees from a delegation of 1730.

Hopefully, officials in the Atlanta statehouse didn’t take down their copies of this famous painting after the appearance of this “scoop.” Not to put too fine a point upon it, we wuz wrong. In preparing the new book Cherokee DNA Studies II, I finally obtained a high-resolution, complete color copy of this masterpiece from the Winterthur Museum (© 2013 Winterthur Museum, Garden and Library). 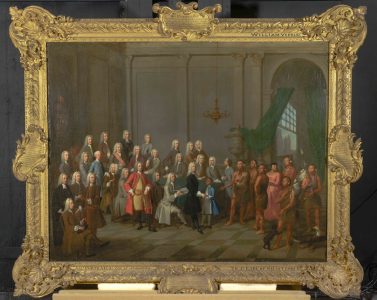 1956.0567 A B. Audience Given by the Trustees of Georgia to a Delegation of Creek Indians, by William Verelst, London, 1734-35, Oil on canvas, 1956.0567 A, B. Gift of Henry Francis du Pont, Courtesy of Winterthur Museum. Photo by James Schneck, Staff Photographer. © 2013 Winterthur Museum, Garden and Library.

I share the image here with readers complete with its stupendous frame. These really are Creek Indians, not Cherokee models or generic Indians as was originally thought. Their names can be read from the cartouche at the bottom of the frame: Tomochichi, Senauka, Tooanahowi, Umphichi, Hillispilli, Sintachi, Stimatichi, Apotomstsi (?), John Musgrove interpreter.

“I could have told you those were Creeks,” said our irrepressible friend Richard Thornton. “In fact, I could have told you which branch of the Creeks they were from, just from their appearance and that the two boys were part-African from a Mustee mother. Didn’t you notice the Itsate Creek with the flattened forehead?  He looks just like a fullblood Maya.”

We are properly chastised. We retract everything we wrote in the Journal of Cherokee Studies about Creek Indians, though we are not ready to discard all our theories about crafty English treaty making and the political invention of Indian tribes.

The Audience Given by the Trustees of Georgia to a Delegation of Creek Indians of 1734-35 illustrates a common pitfall of historical research. Clues to the big picture sometimes hide in the frame of history. Marginalized communities and fragile ethnic identities often have a role out of proportion to their small numbers. The democratic majority is not always right, exceptions sometimes prove the rule and a consensus is not always a conclusion.

Detail of cartouche with key. © 2013 Winterthur Museum, Garden and Library. 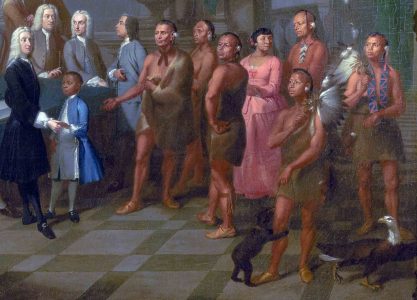 Were they really that red? The scientist Constantine Rafinesque said in 1840 there was never a red Indian in the Americas unless so painted, and French naturalists recorded in 1653 that “they are all born perfectly white, but they change the natural color of their skin by the frequent use of a certain ointment that they create with bear grease and the root of an herb that has the virtue of inuring them against heat and cold.” (Translated from the French in App. D, “Digression Containing a Summary of the History of the Land of the Apalachites,” Cherokee DNA Studies II: More Real People Who Proved the Geneticists Wrong [forthcoming], p. 388-89 in the French edition of 1681 published in Rotterdam.)