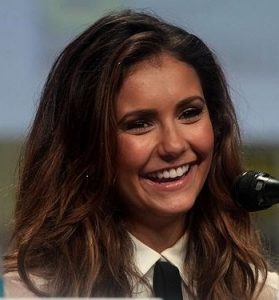 Photo: Nina Dobrev (born Nikolina Konstantinova Dobreva) is an actress who was born in Sofia, Bulgaria in 1989. Photo by Gage Skidmore accessed on Wikimedia Commons.

Bulgaria is a country in southeastern Europe that is bordered by Romania, Serbia, Macedonia, Greece and Turkey.  Bulgarian is the official language of Bulgaria and is the oldest written Slavic language.  Most Bulgarians live in Bulgaria but there are sizable ethnic Bulgarians in Turkey, Greece, Ukraine, Germany, Spain, the United States, Moldova, Argentina, the United Kingdom, Brazil, Italy, Canada, France and Russia.

The Bulgarian population data set represent DNA samples from 103 ethnic Bulgarians (mostly from Plovdiv) and 102 Karakachani from Sliven and Karlovo.  Karakachani are a group of Greek-speaking people who were once known to live a nomad’s lifestyle and now reside in the vicinity of the town of Sliven, Bulgaria.