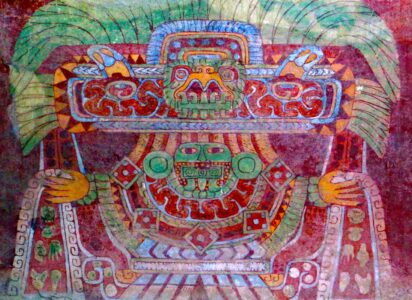 IMMANENT, ELEMENTAL, PRIMAL. Great Goddess of Teotihuacan, or Chalchihuitlicue, also worshiped as Grandmother, Earth Mother and Creatrix. This mural from one of the underground merchant guilds of the great metropolis, ca. 400 CE, well illustrates the underlying matriarchal background in the Mesoamerican world that could never be entirely covered up by patriarchal institutions. The Goddess wears a richly colored tableta with a greenstone (chalchiuitl) mask marked by the goggly eyes of Tlaloc and surmounted by lush vegetation bordered with quetzal bird feathers. She also wears greenstone ear spools and a necklace. The fretted chain she holds in both hands represents the abundance and nourishment she brings to living things. Her fangs show she can be destructive and well as creative. As queen of the underworld she is responsible for transforming dead souls into reborn clan members. Wikipedia.

Everything that has been written by men about women should be viewed with suspicion, because they are both judge and party.

What both the 17th century philosophe Poulain and 20th century feminist Beauvoir said of men writing about women applies also to men writing about goddesses and matriarchy. Since stumbling upon the story of Bottle Woman, the Grandmother Moon Goddess of the Cherokees—and having a revelation similar to Lucius’ in The Golden Ass, when the Mother Goddess herself appears to him in all her terrible beauty[2]—I have learned to tread cautiously in the literature of feminism, women’s history and anthropology.

After discovering that the Tainos and Apalache Indians of North America were offshoots of the Sea Peoples and Ancient North Eurasians, preserving some of their antecedents’ matriarchal characteristics as well as their mitochondrial DNA,[3] I began to contemplate having to investigate the much wider topic of Great Goddess religion and matriarchal societies in the Americas, where some vestiges of the cult of the Goddess survive even to the present. It was a daunting task.

Did the Arawaks, Hopi, Iroquois, Cherokee and certain other tribes receive, in effect, a double dose of matriarchy, entailing a dynamic which set them apart from the majority of tribes and impeded or prolonged the conversion to patriarchy? Why was Aztec society and certain other American Indian cultures so extreme in their forms of patriarchy? These were all loaded questions. They boiled down to whether an Age of Matriarchy giving way to patriarchy had historical reality or not, and whether it was of worldwide occurrence and consequence.

In February of 2021, Heide Goettner-Abendroth published the third volume in her series Matriarchale Gesellschaften Der Gegenwart (Matriarchal Societies of the Present Day). It is a revision of the same material covered previously in an English version called Matriarchal Societies: Studies on Indigenous Cultures across the Globe.

With the publication of these and other works in her maturity, Goettner-Abenroth has produced a brilliant critical conceptualization of the deep structures shared by matriarchal societies throughout history. Plus, she has compiled an astounding dossier of case studies, ranging from the matriarchal mountain peoples of China and still-existing Amazons of South America to the Tuareg and Bantu. No one can deny there are not good theoretical and practical foundations in the field, as well as a wealth of case studies.

No longer could historians and anthropologists object there was no evidence for matriarchal societies: It was all feminists’ wishful thinking and radical philosophizing. The put-down of “old wives’ tales” could no longer be used to dismiss Gimbutas, Robbins Dexter, Estés and other female authors on the Goddess.

What can we say about matriarchy in the Americas? First, one has to admit that New World indigenous societies, for the most part, bury the matriarchal under the patriarchal. The world of the women is usually out of sight for observers. How did white men like Fewkes and Curtis miss all the wealth of detail Goettner-Abendroth brings out in her chapter on the Hopi, the “Peaceful People”—the existence of female societies, a whole cycle of kachina ceremonies where the women dance instead of the men, life-cycle festivals entirely in the hands of the women, name giving through the matriline, female ownership of houses and great women architects, on and on (pp. 269-95)? The reason, she says, is they talked with no women. And no women talked to them.

Goettner-Abendroth’s descriptions of Hopi villages and other cultures included in Matriarchal Societies are based on personal, in-depth and prolonged communications with mostly women, who share aspects of their homes and lives on a woman-to-woman basis. She says she visited the Hopi in 1996, as many of their traditions were fading from usage. In a few more years, when my wife and I visited, even more of their religion, arts and language was gone.

It doesn’t help matters that virtually all the experts on the subject are non-native white men, from to Bachofen, Dietrich and Tyler to Eliade, Neumann and Hultkranz.[4] Even the authors of individual studies are mostly men.[5] The curator of the ethnological department of the National Museum in Washington, D.C., Frank Hamilton Cushing (1857-1900) lived among the Zuni and collected their stories and religious customs, becoming a Priest of the Bow and being given a Zuni name (Medicine Flower), but it is doubtful he ever interacted much with the tribe’s women, which would have been taboo.

A religious studies professor at the University of Colorado, Sam D. Gill, analyzed the goddesses of North American Indian tribes (in as much as they were distinct from an unsexed animistic spirit or generalized presence), and found it was not true Native Americans venerate a central Mother Earth. In fact, the cult and concept were invented in the twentieth century by white male anthropologists and Indian activists, only to be embroidered by New Age writers in the 1970s and onward.[6] Sacred Land and Earth Mother were not the same.

The main goddesses of the Aztecs are Coatlicue, the highest one, also called Snake Woman, or Cihuacoatl, Xochiquetzal, her daughter, goddess of beauty, Tlazolteotl, goddess of lust, Tlaltecuhtli, an old Earth Goddess, Tonantzin (“Our Mother”), Toci (“Our Grandmother”), Chalchihuitlicue (“she whose gown consists of green jewels”—her emblem was the pot of water or vessel of plentifulness) and Coyolhauhqui, a Moon Goddess, who was very popular. Coatlicue, whose name means Serpent Skirt, was known as the mother of the gods and patron of love, marriage and prostitution. She is represented wearing a skirt of writhing snakes and a necklace made of human hearts, hands, and skulls. Her feet and hands are adorned with claws and her breasts are depicted as hanging flaccid.

Some of the goddesses had very specific roles. For example, Malinalxochitl was goddess of snakes, scorpions and insects of the desert. 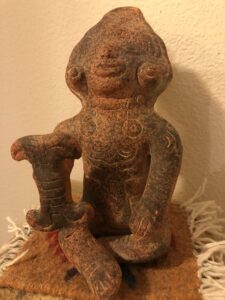 This Maya terracotta Snake Goddess holding a flint knife and marked with lunar symbolism and the face of Tlaloc, the Rain God, was recovered by scuba divers in 1939 in the main cenote at Chichen Itza. It is probably pre-Columbian, dating to a time when actual human sacrifices were no longer common and votive offerings of clay, silver or gold instead of sacrificed victims were cast into bodies of water. These, like caves, were conceived of as the entrances to the underworld, giving access to the Great Goddess to perform boons.

The Aztec attitude toward female deities was ambiguous. There is mention in their chronicles of a city of women left behind on the third stage of their migration from the American Southwest (Aztlan, Atala, Place of Whiteness, the old name of America) to the Valley of Mexico. It was called Malinalco, after the goddess who was the sister of their god Huitzilopochtli and daughter of the Great Goddess, Toci, Our Grandmother.[7]  The main, patriarchal body worshiped the god of war. It demonized the matriarchal, peace-seeking wing of the clan mothers, claiming they were all witches. This, of course, was the normal progression of events for supplanting matriarchies with patriarchies, whether we are talking about the Near East or the Americas.[8]

Aztec society developed an extreme militarized patriarchal character. Even the act of childbirth became colored by the death cult, and pregnant women were likened to soldiers, for whom the greatest honor was to die. The analytical psychologist Erich Neumann wrote that in Mexico the “power of the Goddess has grown almost invisible, and the male principle of the light and the sun is dominant.”

Neumann pointed out that “side by side with the king there governs a figure that, though always represented by a man, bears the name of the terrible Earth Mother: the ‘Snake Woman’. . . A fearsome multi-ton basalt statue of Coatlicue from around 1500 was found at the bottom of the Templo Major in the center of Tenochtitlan where thousands of human sacrifices were routinely performed. It is now in the National Museum of Anthropology, Mexico City. Here there is no doubt that an originally matriarchal constellation was overlaid by patriarchal institutions. Among the tribes of North America, we often find that the old women, without official power, govern the internal affairs of the tribe, while the warrior chiefs govern the outward affairs. This corresponds to the original matriarchal situation, in which the group of the women and children is governed by the Old Woman, while the fighting and hunting men’s society is ruled by the warrior chieftain or democratically by the male group.”[9]

Clearly, the patriarchal dominance in the culture of Mexico (at least in its most recent manifestation with the Aztecs) is far more evident and the matriarchal undercurrent much less discernable. The vast number of goddesses itself confuses the issue and seems to weaken the feminine power. Most images of the Goddess in the Aztec worldview focus on the Terrible Mother, who is fearsome. She is called Snake Woman (Coatlicue) and often has death’s heads about her.

According to Neumann, the Aztecs had an inordinate fear of death, like the Egyptians. But as Goettner-Abendroth and Barbara Mann demonstrate, in many American societies it is the Great Goddess as source of all life and everything good that prevails. Thus there are important chapters on the Arawak, Kuna, Hopi and Iroquois in Matriarchal Societies.

Hopi Pottery and the Cosmos – Matriarchy vs. Patriarchy – Part Three

[2] See chapter 7, “She Who Walks with the Little People,” in Old World Roots of the Cherokee: How DNA, Ancient Alphabets and Religion Explain the Origins of America’s Largest Indian Nation, foreword by Richard Mack Bettis (Jefferson, N.C.: McFarland & Company, 2012), pp. 106-117.

[7] Diego Durán, The Aztecs: The History of the Indies of New Spain, translated with notes by Doris Heyden and Fernando Horcasitas (New York: Orion Press, 1964), pp. 14-17.