Exhibit at British Museum
Underlines Our Debt to Egypt

Andrew Robinson reviews the British Museum’s new exhibition “Journey through the Afterlife” in this week’s Nature (468:632f.). London has the largest collection of these guidebooks that were customarily placed beside mummified corpses in the graves and tombs of the dead. It is not likely the large exhibit will travel, however, because of the fragility of the paints and papyrus scrolls.

The ancient Egyptians called these compilations the “book of coming forth by day,” because they conceived that the soul (ba) of the deceased flew about during the daylight hours and continued to enjoy life. It was Egyptian excavators who coined the term “book of the dead.”

According to the catalogue, it was Egyptian religion, despite its pantheon of animal-headed deities and plethora of magic spells, that was the foundation of Western systems of morality. The expression “light-hearted” reminds us of this. The Egyptians believed–thousands of years before Hammurabi or Moses–that you were answerable for your lies and sins upon death, and that your heart would be weighed by the god Anubis against the feather of truth. 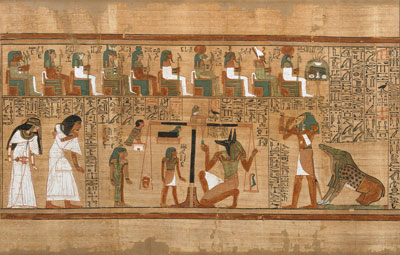 Ancient Egyptians believed that their lives would be judged by the gods when they died. Trustees of the British Museum.