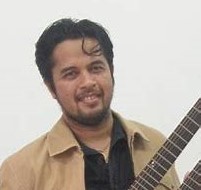 Photo: Balawan, born in Bali, known for his ability to play the double-neck guitar. He is called the Magic Finger Guitarist among the world’s guitar community.

Bali is a province of Indonesia and the westernmost of the Lesser Sunda Islands. East of Java and west of Lombok, the province includes the island of Bali and a few smaller neighbouring islands.

It is the only Hindu-majority province in Indonesia, with 82.5% of the population adhering to Balinese Hinduism. It is also renowned for its highly developed arts, including traditional and modern dance, sculpture, painting, leather, metalworking, and music.

Bali was inhabited around 2000 BCE by Austronesian people who migrated originally from the island of Taiwan to Southeast Asia. The first known European contact with Bali is thought to have been made in 1512, when a Portuguese expedition led by Antonio Abreu and Francisco Serrão sighted its northern shores. In 1597, the Dutch explorer Cornelis de Houtman arrived at Bali, and the Dutch East India Company was established in 1602. Dutch political and economic control over Bali began in the 1840s on the island’s north coast. In the late 1890s, struggles between Balinese kingdoms in the island’s south were exploited by the Dutch to increase their control.

Imperial Japan occupied Bali during World War II. In 1945, Bali was liberated by the British 5th infantry Division who took the Japanese surrender. Once the Japanese forces had been repatriated the island was handed over to the Dutch. In 1946, the Dutch constituted Bali as one of the 13 administrative districts of the newly proclaimed State of East Indonesia, a rival state to the Republic of Indonesia. Bali was included in the “Republic of the United States of Indonesia” when the Netherlands recognized Indonesian independence on 29 December 1949.

Bali represents 79 individuals who were identified by biogeographic information traced back at least two generations. Each collection was arranged through the leaders of each region and supervised by the same. The samples were amplified by PCR using the commercial AmpFISTR Identifiler kit.