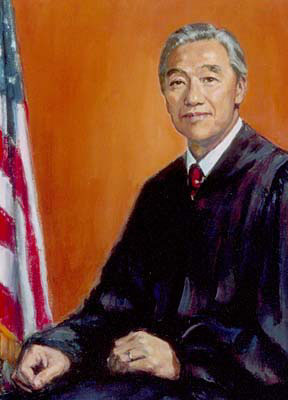 Judge Herbert Choy, in office from October 1984 until March 2004

The first Asian-origin people known to arrive in North America after the beginning of the European colonization were a group of Filipinos known as “Luzonians” or Luzon Indians. These Luzonians were part of the crew and landing party of the Spanish galleon Nuestra Señora de Buena Esperanza. The ship set sail from Manila and landed in Morro Bay in what is now the California Coast on 17 October 1587. By the 1830s, East Asian groups had begun immigrating to Hawaii, where American capitalists and missionaries had established plantations and settlements. Originating primarily from China, Japan, Korea, India, Russia and the Philippines, these early migrants were predominantly contract workers who labored on plantations. The first major wave of Asian immigration to the continental United States occurred primarily on the West Coast during the California Gold Rush, starting in the 1850s.  Chinese immigrants numbered less than 400 in 1848 and rose to 25,000 by 1852. Japanese, Korean, and South Asian immigrants also arrived in the continental United States starting from the late 1800s and onwards to fill demands for labor.

The Asian – U.S. population data represent DNA samples from 161 Asian-American individuals in the United States. Samples were taken from a database at Promega Corporation, located  in Madison, Wis.