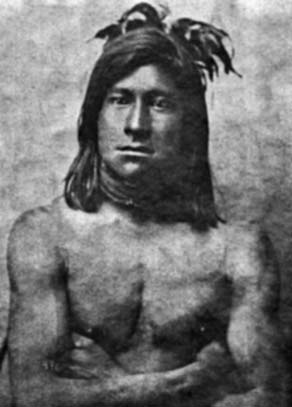 Admixture in Pima Includes Greek and Sardinian: Genetic Signature of the Minoans, Sea Peoples and Other Mediterranean Peoples in the Southwest?

As shown by an explosive article inScience last year, “A Genetic Atlas of Human Admixture History,” the genetic signatures of historical admixture events are persistent, even on a fine scale. Among 100 cases of historical admixture involving two distant, separate populations coming together, the authors detected the genetic impacts of the Mongol empire, Arab slave trade, Bantu expansions and European colonialism in the Americas.

But many, if not most of the admixture events occurring since 2000 BCE turn out to be unrecorded and previously unknown. They can be reconstructed and established only by genetics and the tell-tale survival of segments of distinctive DNA in descendants.

A Major Signal of Mediterranean Ancestry in Pima Indians

Of interest to us is admixture in the Pima Indians of southern Arizona and northern Sonora, long held by anthropologists to be a classic “Amerind” population (see vintage photo of Pima man).

The Pima case study from the genetic atlas of admixture by Hellenthal et al. is a simple instance of one-time collision between two interbreeding populations. A “Turkish-like” Side 1 is one of the parent populations of the mixture. Its largest distinctive element is Greek and Sardinian. Side 1 joined together with Side 2, a Maya-like population. Their union is estimated to have occurred around 1754.

We suggest this date corresponds to the spread of Spanish Missions in Sonora (to which southern Arizona then belonged), which brought slaves and workers from within Mexico to work in the mines (Side 2). This means the Mediterranean-like Side 1 corresponded to the existing number of about 2,000 Pima and Papago Indians. Their distinctive marks, genetically speaking, were resemblances to Greeks, Sardinians and related Mediterranean populations.

A Greek Athlete and a Pima In 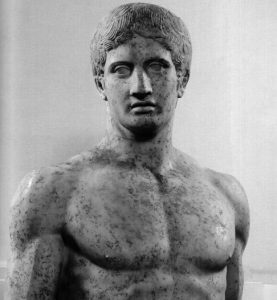 The Pima man shown above has a physiology and facial features unlike many other American Indians; for instance, he has a Roman nose, thin lips, non-Asiatic eyes and a heavy musculature. He evokes the Doryphorus, a canonic statue by Polyclitus, a Greek sculptor who dominated the art of ancient Libya, the eventual home of the Sea Peoples. The features of the Doryphorus were considered the ideal of male beauty.

Barry Fell was perhaps the first to suggest that Minoans, followed by the Sea Peoples, Libyans and Phoenicians, discovered the rich metals of the American Southwest after 2000 BCE and developed its first civilizations, for which the cultural earmarks were pithouses, adobe, trade centers like Snaketown, fortresses and walled cities, painted pottery and irrigation systems. Thus, the Coyote Chant of the Pima Indians, which the Smithsonian interpreted as a crude invocation of a totem spirit, Fell translated as a Libyan version of the Aesop fable about the Fox and the Grapes, one commonly used in ancient schoolrooms. (See especially, Saga America, Epilog:  Sunset at Cyrene, pp. 387ff.)

It would appear that the Pima and Papago Indians, whose ancient name was Hohokam (“Sea Peoples”) long stood apart from other Indians and preserved their ancient roots until the mixing and melding of Indian populations that occurred under the Spanish.

The presence of 7-10% Greek and related DNA in Pima populations today also explains the survival of the labyrinth symbol, diagnostic of Minoan civilization, and early legends about the Earth Doctor, who founded their tribe coming from the other side of the world. Their spiritual leaders are called Siwani, after the Siwa oasis in Libya. Snaketown and Tumamoc Hill overlooking Tucson, two of their principal towns, allude to the Water or Snake Clan or ships of the Sea People and the horny toad or armored figure in their mythology. Tumamoc literally means “Mound of the Magician,” as armored, advanced navigators and miners were considered magicians by the primitive “Indians” they encountered. One of the original names of the Hopi was Moki (“magicians, magi”), and the real name of the Zuni is Shiwi, another reference to the sacred site Shiwa and universal principal god Shiva (both of which predate Egyptian, Hebrew and Greek religion).

Other smaller contributors to Side 1 admixture in the Pima are Tunisian, Mozabite, Druze and Bedouin DNA, reinforcing the North African component of the seaborne civilizers who built the Southwest’s first “Indian” towns. The stone structures atop Tumamoc Hill have been securely dated to at least third century BCE. The three story tower that originally stood on the summit is gone now, but there is an inscription near the highest point facing modern-day Tucson in ancient Phoenician letters. It is an offering to Tanit and Baal, the gods of the Sea Peoples. A similar inscription is at the top of A Mountain or Signal Hill just to the east of Tumamoc.

Before modern times, if a Pima woman was impregnated by an Apache, white man or any non-Pima male the child would be killed at birth. Such measures preserved the integrity of the Pima population.

Both Side 1 and Side 2 share South American Indian DNA (Columbian Indian, Karitiana). Side 1 is further marked by a different type of Maya, Daur (a Khitan or Turkic/Mongol type), Xibe (a Mongolian people formerly known as Shiwei–a coincidence?) and the She people, an important coastal Cantonese Chinese ethnic group (were they some of the ship owners?).

Side 2, the “Amerind” partner in the admixture, in addition to being about two-thirds Central and South American Indian in DNA segments, had significant strips of recombinant genetic material matching Japanese (2.9), Han Chinese (2.3), Oroqen, a Mongol or Turkic people (1.9), Hazra, an important Afghan people (1.6), Chuvash (Turkic, Central Asian, 1.4), Yakut (Turkic from Lake Baikal, 1.0), Burushko (Phyrigian or Macedonian or Anatolian people who migrated to Pakistan with Alexander the Great, 1.0) and Hezhen (a tiny Altaic Turkic minority today in northeast China, 0.8).

The diverse list of contributions on both sides of the admixture equation shows that the Pima were formed from a complex scenario of three or more admixture events in history, not just a simple case from the mid-eighteenth century. All the constituent populations can still be picked out today with admixture analysis. The Pima Indians’ genetic characteristics are compound admixture over time, with key events occurring in the second millennium, about 225 BCE, 600 CE, 900 CE, 1100 CE and 1750 CE.

The original Greek origin of the settlements in Arizona may have been apparent to other pre-Columbian visitors and settlers, including the Romans, who claim to have created the records known as the Tucson Crosses or Calalus Artifacts. Is it a coincidence that a property marker midway between Tucson and Phoenix in the lower Santa Cruz river valley has a large inscription in ancient Roman capitals that reads, “Greeks” (Attii). 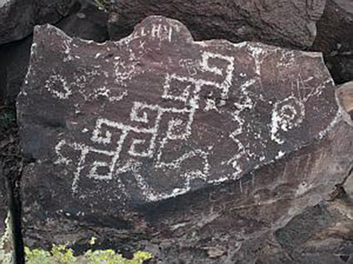 Petroglyphs with snake imagery, ship and meanders along with Phoenician inscription on Tumamoc Hill. 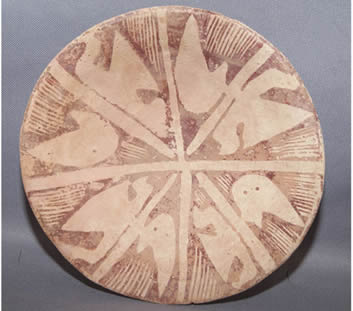 Hohokam bowl with bird-prow ships (compare to Tumamoc inscription above).

Byzantine-era soldier depicted on Mimbres bowl ca. 1100. He has a helmet, metal-tipped arrows, scale armor, and shield carrying a rose (rhoda). Rhoda was the name of a mining colony founded in Calalus ca. 790. The lizard stands for the Water Clan, or those who originated overseas. The same rose is found as a territorial mark on Sentinel Hill and Cocoraque Bluffs in the Silverbell Mountains north of Tucson.