Implications for Jewish History and Genealogy

This blog posting attempts to summarize this important article and translate its technical results into layman’s language for the sake of our customers. From the genetic evidence, we hope to glean some useful information about Jewish history and genealogy, especially for those who find they have “some” Jewish ancestry in their family tree but who are non-Jewish in the way they identify.

The eleven authors represent a stellar team of international researchers specializing in population genetics. The institutions involved are leading centers of genetics and biomedicine, starting with the Albert Einstein College of Medicine in New York and including Tel-Aviv University in Israel. Appearance in the American Journal of Human Genetics, a publication of the American Society of Human Genetics, assures prestige and finality of the highest order.

The study uses a new sample of 237 carefully qualified Jewish subjects, which it compares with data from the Human Genome Diversity Project started at Stanford in the 1990s, as well as the Population Reference Sample (PopRes) project, containing hundreds of thousands of SNPs (single nucleotide polymorphisms, used to differentiate genes that show heredity lines and disease linkage in populations).

The scale of the project is colossal, and it must have taken years to complete. Financial support came from private and public sources, including the U.S.-Israel Binational Science Foundation and NIH. It supersedes (while it confirms or clarifies) the two types of previous approaches to the problem: 1) genetics studies on blood groups from the 1970s, and 2) recent studies of Y chromosomal and mitochondrial haplotypes. The latter “uniparental” studies could only offer a limited view of the subject. This study uses autosomal DNA to its full advantage. The scientists had supercomputers and the latest tools in biostatistics at their disposal.

The two cornerstones of any statistical study are reliability and validity. Experts would be challenged to find anything wrong with the reliability of “Abraham’s Children.” State-of-the-science genotyping, phylogeny, bootstrapping and GERMLINE algorithms are employed. But validity issues may be mentioned as likely to call some of the findings into slight question in some areas. Subjects were recruited in New York (Iranian, Iraqi, Syrian and Ashkenazi Jews), Seattle (Turkish Sephardic Jews), Greece (Greek Sephardic Jews) and Rome (Italian Jews). The main divisions into Italian, Ashkenazi, Syrian, Middle Eastern (termed Mizrahi, or Eastern, Jews here) can be seen in some instances to be question-begging, and there are equivocations in labels that might, conceivably, create “desired results.” Moreover, subjects “were included only if all four grandparents came from the same Jewish community.” Such a rule might have influenced one of the findings, namely, that “Jewish Communities Show High Levels of IBD,” or Informative By Descent shared segments of DNA (p. 855f.).

Notably, the conclusion that Ashkenazi Jews are highly inbred, with most being as close as 3rd or 4th cousins to each other, could be an effect of the sample selection from New York Ashkenazi Jews, who often emigrated together and belonged to the same synagogue for several generations. A larger, more randomized selection would have been better. The total number of Ashkenazi Jews used was only 34 persons.

Jews now living in Rome are not the same as Roman Jews. Traditional schemes of Jewry speak of the Romaniot Jews, but these were traditionally at home in the Byzantine Empire. Are Syrian Jews mostly Middle Eastern or are they another amalgam of émigrés and remnants? Where are Central Asian Jews like the large Uzbekistani population my local barber represents? The absence of Caucasian and Central Asian Jews may have affected the study’s rather resounding, over-confidant statement that it “refutes” the contention that Ashkenazi Jews have little Middle Eastern heritage and rather more of a contribution to their genetics from Khazars and Slavs. The study, like many, seems at pains to prove Middle Eastern connections of Ashkenazi Jews, who are the leading force in present-day Israel.

There are no German, Dutch, Spanish, Portuguese or English Jews in the study. “Ashkenazi” seems to represent Jews living in New York with rather uniform ancestry in Poland, Hungary, Ukraine, Lithuania and Russia. All Jews in the study seem to be of the “go to temple” (at least on the High Holy Days) sort, although no mention is made of religious orientation. Subjects were chosen because of their ostensibly “pure” Jewish roots. 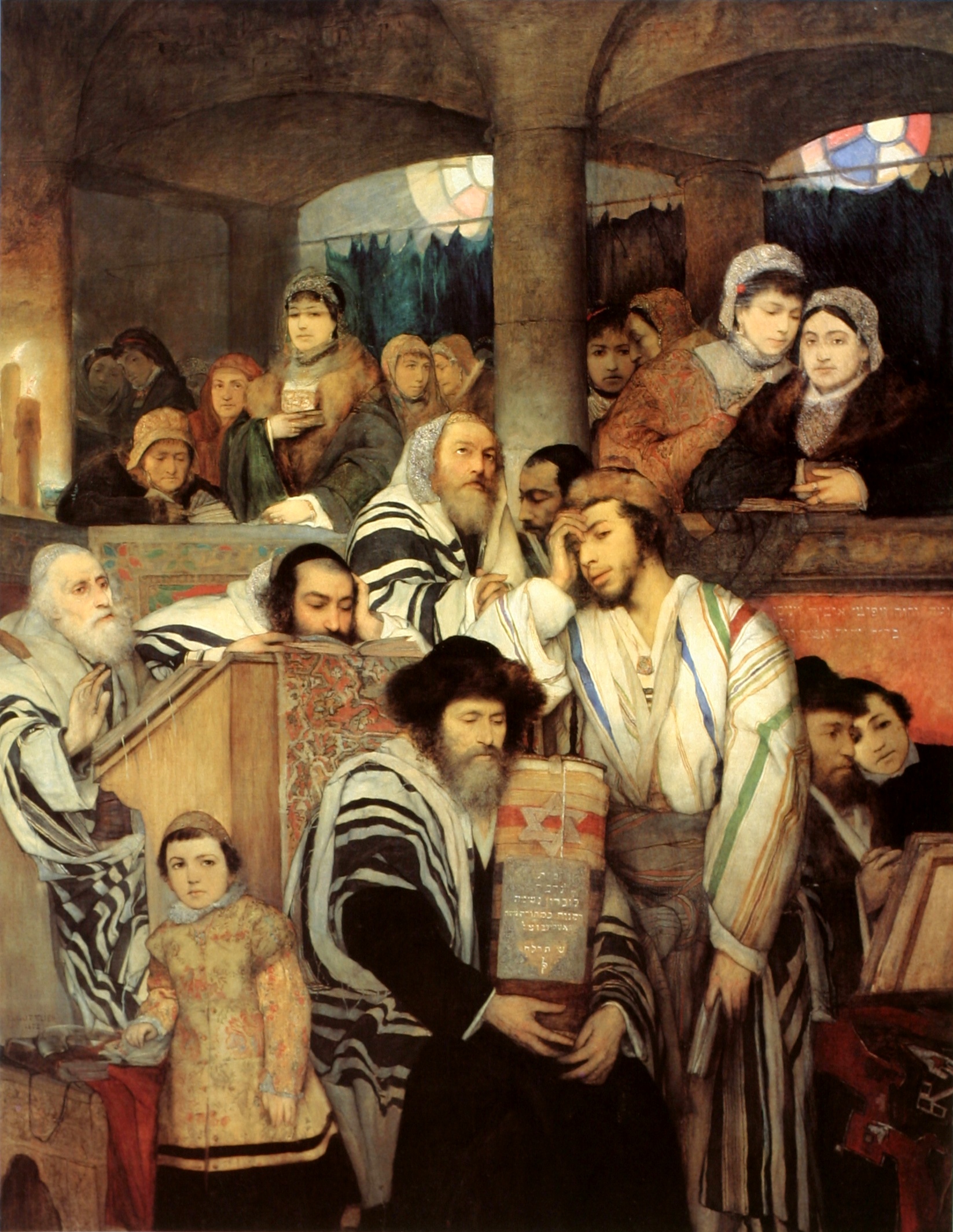 Ashkenazi Jews at Yom Kippur in 19th century Central Europe from a painting by Gottlieb.

These were sorted out into three major groups of the Jewish Diaspora:

How Different are Jews from Each Other? From Non-Jewish Populations?

Table 1 on page 853 shows Fst values, which indicate the degree of projected inbreeding within a cluster and allow one to make comparisons between clusters. If we look at the table of genetic diversity among Jews, we can pick out some of the following points of interest:

The study identifies two major groups of Jews, characterizing them as Middle Eastern Jews and European/Syrian Jews. Of the Middle Eastern Jews, the Irani and Iraqi were scarcely distinguishable. The Europeans have varying degrees of admixture with non-Jewish populations into which they have been dispersed. European Jews are 20-40% (or on another page, 30-60%) European, the study concludes, while Sephardic Jews have 8-11% North African (Berber) DNA. Italian, Syrian, Iranian and Iraqi Jews are the most inbred.

All these statistics “highlight the commonality of Jewish origin” and expose the Middle Eastern origins and genetic unity of Jewish people, even in dispersal from their homeland in ancient Israel.

The flipside of inbreeding is outbreeding or exogamy. If European Jews are highly admixed, by the same token, many Europeans must have some degree of Jewish admixture. Gene flow did not go just one way. What are the most outbred Jewish clusters according to the study? It is the Sephardic Jews from Italy, Greece and Turkey, with low rates of shared IBD and greater diversity than the Ashkenazim.

The brief Discussion section at the end of the article attempts to put the statistical findings together with an outline of Jewish history and resolve some of the mysteries of Jewish genetic makeup, chiefly the Khazar question. “Each of the Jewish populations formed its own cluster as part of the larger Jewish cluster,” the authors conclude. “Each group demonstrated Middle Eastern ancestry and variable admixture with European populations.”

Next, the authors attack the difficulty of determining when the major split between Eastern and Western Jewish groups occurred (with Syrians falling out with the Sephardim and Ashkenazim in the West, although intermediate in genetic distance with Middle Eastern Jews like the Iraqi and Irani). Based on IBD or calculations of shared genes on the front end or bottlenecks and back end or genetic drift, “a split between Middle Eastern Iraqi and Iranian Jews and European/Syrian Jews…is 100-150 generations [or] 2500 years ago.” They correlate this population divide with the Babylonian and Persian periods of Jewish history. These disturbances began in the 900s-800s BCE when the Kingdom of David fell apart into the Kingdom of Jerusalem and the Northern Kingdom (Samaria , Israel, Ephraim) and were finalized in the 6th century BCE when King Cyrus of Persia granted permission to the exiles to be repatriated from Babylon to Jerusalem.

In the shuffle, the so-called Lost Tribes representing the Northern Kingdom had been dispersed “beyond the river” into Central Asia, leaving the Judeans in the ascendancy in Israel. Although the authors do not explicity state it, the fact that Syrian Jews are several quantums’ length closer in affinity with European Jews than Middle Eastern Jews seems to reflect the historic Return to Zion and inauguration of the Second Temple in Jerusalem in 516 BCE and explain why European Jews, especially Sephardim, emphasize the House of David and Tribes of Levi in their traditional ancestral accounts. So far, the autosomal clock of change seems to beat with the march of history. 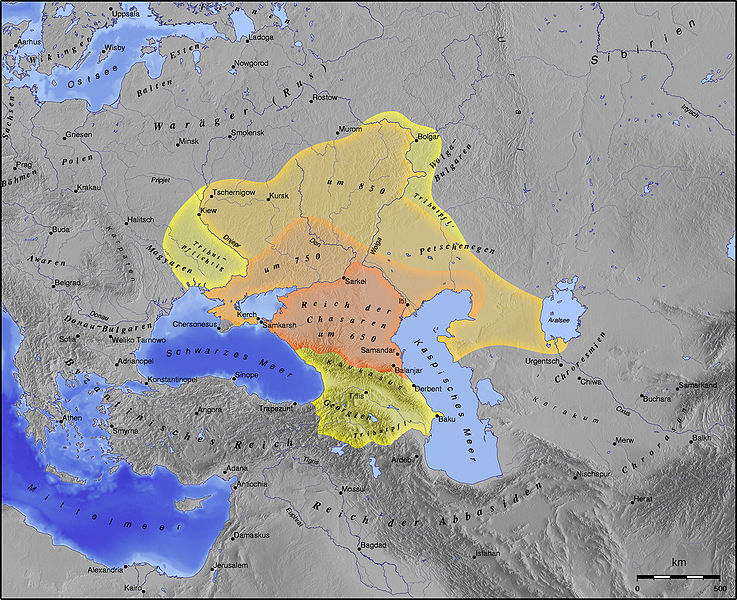 Khazar kingdom in the Middle Ages.

The article is clear about another thing, “the idea of non-Semitic Mediterranean ancestry in the formation of the European/Syrian Jewish groups,” attributing this to the mass conversions and proselytism during Greco-Roman times. It mentions that there were six million Jews in the Roman Empire, when Judaism accounted for 10% of the population. But here is where the authors’ sense of history begins to get fuzzy. They do not speak of medieval conversions or mention, for instance, the Jews of Visigothic and Berber Spain and Septimanian France and gloss over the huge Khazar conversion and expansion event, 600-1000 CE. Again, medieval history does not seem to be geneticists’ strength.

“Abraham’s Children” claims that the genetic composition of European/Syrian Jewish groups “is incompatible with theories that Ashkenazi Jews are for the most part the direct lineal descendants of converted Khazars or Slavs” (857). In this brief sentence are a number of fallacies, special pleading, misnomers, false assumptions, sleights of hand, straw arguments and equivocations. This blog  posting can only touch on the controversy, but to begin with, as we have seen, Ashkenazi Jews (n=34, all from New York) are lumped together with Sephardim and Syrian Jews as having Middle Eastern core pedigrees, even though they have the highest amount of local population admixture. Are Khazars the same as Slavs? Not ethnographically. They are sometimes treated as Middle Easterners and sometimes as Europeans or other interlopers in this article, but it doesn’t seem to matter really, because there are no Khazars in the study sample. The authors are thus stalking a phantom, which they duly track down and slay.

Ghost in the Machine

Using haplogroup studies, the authors raise the possibility of 12.5% non-Middle Eastern admixture per generation in Ashkenazi Jews (based on Hammer et al.). They also draw attention to the 7.5% frequency of haplogroup R1a1 among Ashkenazi Jews, a non-Middle Eastern, rather Eastern European male lineage. But R1a1 is not diagnostic of Khazars; try maybe G. R1a1 descendants are typically fair haired and light-eyed; Khazars had a Middle Eastern, Turkic appearance, with dark features.

In a sense, geneticists always seem to find support for what they set out to prove in the first place. It is small wonder that “Abraham’s Fathers” comes at the end of and completes a decades-long push by Big Science to legitimize Jewish claims to Middle Eastern roots. It is a splendid survey, the last in a long series, but it is not the final word on the subject. There are flaws both in the sampling and historical thinking.

The Thirteenth Tribe (1976) by Arthur Koestler, a Hungarian Ashkenazi Jewish author, advanced the thesis that the modern Jewish population in Central and Eastern Europe is not descended from the historical Israelites of antiquity, but from Khazars. This Turkic people of the Caucasus region converted to Judaism in the 8th century and moved into Russia, Hungary, Ukraine, Poland, Belarus, Lithuania and Germany during the 12th and 13th century when the Khazar Empire was collapsing. Koestler’s work was founded on that of the French scholar Ernest Renan and set off a firestorm of controversy among Zionists.