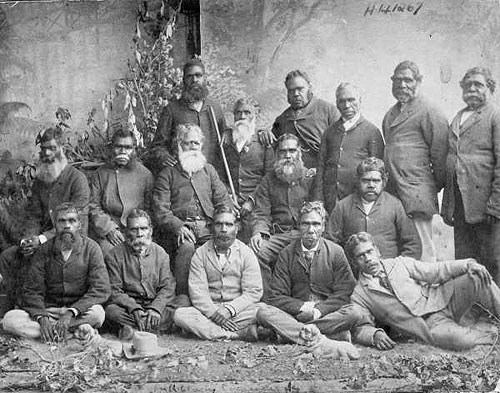 Everyone probably has wondered at some time what makes Aboriginal Australians different from other people, where they came from and how old their ethnic type is. Well, wonder no more. Following up on the previous post, “Australian Aboriginal DNA Gets Attention,” this post will summarize the groundbreaking article in Science magazine, M. Rasmussen et al., “An Aboriginal Australian Genome Reveals Separate Human Dispersals into Asia” (Science 334, 7 Oct. 2011, 94-98).

First the abstract:
We present an Aboriginal Australian genomic sequence obtained from a 100-year-old lock of hair donated by an Aboriginal man from southern Western Australia in the early 20th century. We detect no evidence of European admixture and estimate contamination levels to be below 0.5%. We show that Aboriginal Australians are descendants of an early human dispersal into eastern Asia, possibly 62,000 to 75,000 years ago. This dispersal is separate from the one that gave rise to modern Asians 25,000 to 38,000 years ago. We also find evidence of gene flow between populations of the two dispersal waves prior to the divergence of Native Americans from modern Asian ancestors. Our findings support the hypothesis that present-day Aboriginal Australians descend from the earliest humans to occupy Australia, likely representing one of the oldest continuous populations outside Africa.

Above:  Aboriginal Men about 1900 from the Coranderrk Community. La Trobe Picture Collection.
This study of Aboriginals will be cited as a landmark case in genetics because the authors took especial care to disarm any criticism concerning possible admixture and contamination, achieved a stupendous rate of success in sequencing DNA sites and used smart comparators to verify their model of what makes Aboriginals different, including Neanderthals, Denisovans, Andamanese, Filipinos, Indians, Papua New Guineans and Melanesians. Fifty-eight co-authors are listed, with Morten Rasmussen of the Feinstein Institute for Medical Research, Manhasset, New York, named as the first lead author.

The genetic history of Aboriginal Australians is contentious but highly important for understanding the evolution of modern humans.

Some mysteries pointed out about Aboriginal Australian DNA by the authors include:

–The Aboriginal population contains a lot of diversity, including specimens of most of the world’s haplogroups, male and female

–Related populations suggested are hunger-gatherers from Nepal and the Philippines, Great Andamanese and Onge from the Andaman Islands, Highland Papua New Guineans and certain peoples from India

–The role of hybridization with other archaic peoples was also not clear.

The authors confirm that “before European contact occurred, Aboriginal Australian and PNG Highlands ancestors had been genetically isolated from other populations (except possibly each other) since at least 15,000 to 30,000 years B.P.” Also, “our results favor the multiple-dispersal model in which the ancestors of Aboriginal Australian and related populations split from the Eurasian population before Asian and Europeans split from each other” (97). “We find that the European and Asian populations split from each other only 25,000 to 38,000 years B.P., in agreement with previous estimates.”

The new study finds that Aboriginals have an amount of admixture with Neanderthals and Denisovans comparable to Europeans and Asians, although they have more Denisovan DNA than other people. “This admixture may have occurred in Melanesia or, alternative, in Eurasia during the early migration wave” (97).

In sum, the Aboriginals are part of the same first-out-of-Africa branch of the human tree as Europeans and Asians, their ancestors splitting 62,000 to 75,000 years ago from Africans, and leaving relic related populations in the Highlands of Papua New Guinea and the Philippines. A second expansion wave through India, Indo-China and Southeast Asia replaced the original stock, while the Aboriginals became stranded and isolated in Australia about 50,000 years ago.

“This means that Aboriginal Australians likely have one of the oldest continuous population histories outside sub-Saharan Africa today” (98).

Properly positioning Australian Aboriginals in the expansion of humans out of Africa opens the way to connecting the dots for all the other prehistoric peoples. The migration map presented by Rasmussen et al should be carefully studied for clues about the origins of Asians and Native Americans, to begin with. 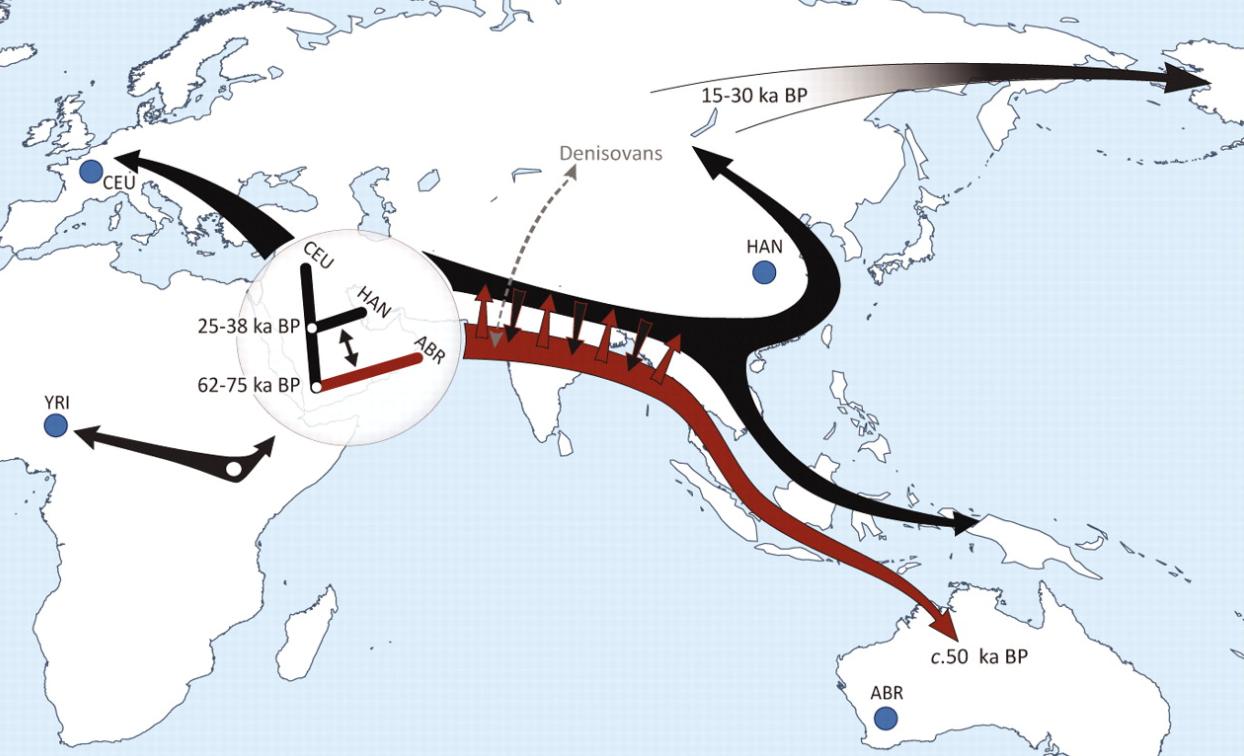 Reconstruction of early spread of modern humans outside Africa. Note admixture between early dispersal (red) and second dispersal (black), as well as presence of archaic Denisovans in Asia. Science magazine.